What comes to mind when you think of the following items?

Lobster (Lobster by tuppus via Flickr Lic CC by 2.0) 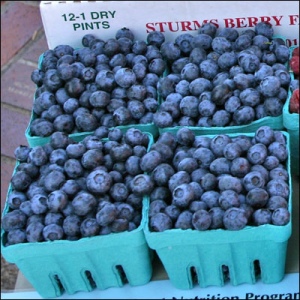 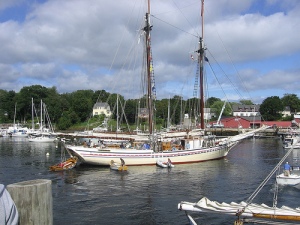 Schooners (Mopping Up by Tassadara C via Flickr Lic CC by 2.0

What if I make it multiple choice:

a)    The latest round of perfectly normal celebrity baby names

If you answered b, you’re correct

If you answered a, you’re probably psychic and will be correct in the very near future

If you answered d, you’re probably a writer

All right, so what the heck am I babbling on about?

My husband has been a woodworker for some time and we have a full shop in the basement, filled with terrifyingly sharp things such as the bandsaw. See what happens when you don’t respect the bandsaw:

He spends his free time down there building furniture for our house (and trying to keep all his appendages fully intact): 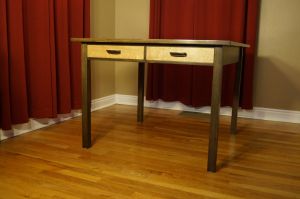 And we finally decided it was time to take his love for woodworking to the next level. So, this August we’ll be heading to coastal Maine where Logan will begin a nine-month comprehensive program in fine furniture making at the Center for Furniture Craftsmanship.

This means leaving his job at the hospital where he’s worked for almost twelve years. It also means leaving behind a steady paycheck, a nice benefit package and the comfort of knowing I could buy as much tulle as I wanted at the fabric store. It also means traveling across the country with three cats, learning to live with humidity, and shopping for a much more substantial winter coat.

Ultimately, it’s a period of letting go of the past, and experiencing, processing and reconciling the unknown.

This leads me to my next point: Liminality.

According to the Oxford Dictionary, liminal is defined as:

-Occupying a position at, or on both sides of, a boundary or threshold

The term was originally used in the context of societal rituals and there is often a ceremony that accompanies the transition. A common example is the transition between childhood and adulthood, marked by the graduation of high school or college.

Over time, the term has been applied more loosely and I tend to identify big liminal events as being marked by some sort of party:

-The going away party

(So, in case you weren’t sure if you were in the midst of a liminal event, if someone wants to throw you a party, you probably are)

It’s in these times of liminality, where we are neither here, nor there, that there is an unusual opportunity for growth, an opportunity to push ourselves, to try new things and discover something new about ourselves.

So, we’ll be packing up soon, fully embracing our liminality, ready to see what happens next!

A car crashes into a writer’s bedroom. The final line of her manuscript (the only manuscript that can save the world from fictitious book eating pigeons) is left unwritten. Will anyone ever read it? Will her story ever be told?

A young woman leaves her “day job” to write insanely humorous urban fantasy. Follow her as she skyrockets to the top of the industry and remodels her house to include a dark, but well lit library. 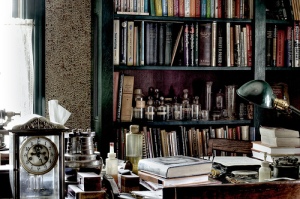 My dark, but well lit future library complete with magical potions, because writing is magical. (Study. Image courtesy of CodyR via Flickr CC 2.0)

These aren’t the plots of Hollywood movies. These are the types of thoughts that run through my mind at night. And by night I mean while in bed desperately trying to fall asleep.

These thoughts can usually be divided into two very distinct categories: Fortune and Fame or Doom and Gloom. Examples:

Fortune and Fame – I can’t wait to sell the first million copies of my book!

Doom and Gloom – What if I never finish the book? What if something happens to me, and my manuscript remains the gooey, messy, but delightful draft that only I’ve read?

Fortune and Fame  – This trip will be amazing! Our Mardi Gras costumes will be the best anyone has ever seen and we’ll be on the front page of every newspaper and meet Angelina and Brad.

Doom and Gloom – Unless our plane crashes into an alligator infested swamp.

Yeah, I might have a little anxiety … countered by delusions of grandeur.

I don’t know why my brain does this. Someone please explain to me the evolutionary advantage of keeping myself up all night worrying about book eating pigeons or fantasizing about my Oscar speech for a book that doesn’t even have a title yet.

This weekend I attended the Pikes Peak Writers Conference (PPWC) in Colorado Springs, CO and guess what? I learned things. I learned new ways to think about things. I learned that “things” isn’t a very strong word. Well, I already knew that, but I liked the use of anaphora. 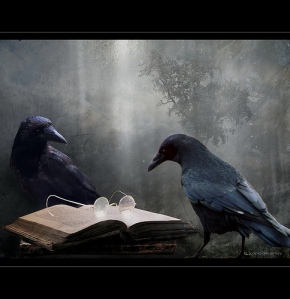 Me looking up the word anaphora. What? You didn’t know I was a crow, with other crow friends? (Reader. Image courtesy of h.koppdelaney via Flickr CC 2.0)

When I sunk into my couch yesterday afternoon, I was filled with a range of emotions, the best being exhilaration. Although, you couldn’t tell from my slack jaw and glazed over eyes.

The conference was three days of workshops, pitch sessions, critique sessions and writerly fun. At times it was overwhelming, and the realities of the writing life can be daunting.

While I was splayed on the couch, my husband asked if I felt discouraged. I didn’t even have to think about my answer. No, I wasn’t discouraged. In fact, I have never felt more encouraged, supported and empowered. I’ve never loved being a writer more.

When 8:00 p.m. rolled around, I was semi-conscious and drooling on a throw pillow. So, I decided to go to bed. And then it happened – I couldn’t sleep. I was up for hours. I reworked my first two chapters in my mind, pondered marketing strategies and, of course, pictured myself walking down the red carpet. There was no worrying, no negative thoughts. Only the positive flowed through my mind.

So, goodbye Doom and Gloom. From here on out, I’m focusing on Fortune and Fame.

It’s feared more than spiders, heights, and Jello molds. Some would actually rather be dead than do it.

Amazingly, public speaking is more frightening to people than going an entire night without cable TV.

And that’s what I was doing last week. I rarely talk about my “other” job, but after eight months of being self-employed, I think it’s time.

I used to work for the state government as a nurse surveyor. This meant that I got to visit home health agencies, hospices and even a few hospitals to evaluate their compliance with state and federal regulations. We’ll just say nobody was happy when I walked through the front door.

Now, I help the same companies that I used to scrutinize. I provide training and education on how to interpret and comply with all those federal and state requirements. This means that on a monthly basis I give presentations. In front of people. For like hours.

This is how I felt about public speaking in college:

Um, I may have done this once. Or twice. 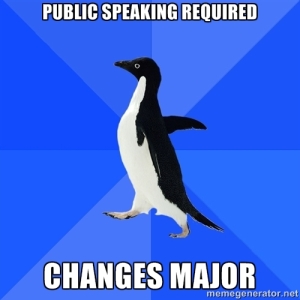 Yes, socially awkward penguin, I understand. I contemplated doing this. 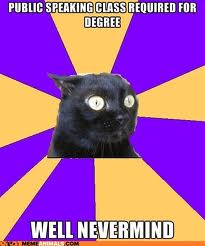 Luckily, I never had to resort to this. I found a loophole 🙂

And that feeling stayed with me into adulthood, although it lessened over time. Soon, I was able to verbalize my thoughts in front of a group of five or ten people without this happening:

But a four hour presentation in front of twenty or so strangers? Hmmm…. Maybe that coffin doesn’t look so bad.

My first presentation brought on some nerves. To help, my body decided to recruit my sympathetic nervous system, which resulted in:

Tachycardia – The fancy word for a fast heart rate

And pretty much the overall sensation that I was going to die.

Thanks, body. That really helped create the illusion that I was confident and composed.

Now, eight months later, I am more confident and composed.

I still get a little jittery before each presentation, but instead of feeling like my heart might explode for the full four hours, I go through the following:

-It’s almost time to start the presentation. Everyone is looking at me. Wow, my heart really can beat 200 times per minute. Maybe I should go throw up really quick. Or just pee. I think I have to pee again.

-Ugh. We’re only two hours into this thing. Is that person sleeping? Yes, I think they’re sleeping. I’m boring them. Better say something funny.

-Says something funny. Everyone laughs. They all go back to sleep. And I don’t take it personally.

-We only have a half hour left. I can do this. Maybe I need some caffeine? Where’s that racing heart beat? I think I need that again. A little shot of adrenaline just might spruce up the last bit of this presentation. Ugh. Body, come on. You were so generous with it earlier.

So, I guess what I’m trying to say is this public speaking thing does get better. The more I do it, the easier it becomes. I almost even like it sometimes. Crazy, huh?

As a side note: My cousin and I are attending our first writing conference this weekend and we’re planning to read the first page of our novels. Out loud. To an agent. And an audience. I have a feeling that pesky sympathetic nervous system will be kicking in again.

As another side note: My cat was sitting on my mouse the whole time I was writing this and she bit my hand every time I tried to use it. But don’t worry – she hardly has any teeth left.