I was making the bed this morning… yes, I still sleep in a bed. A coffin would be way too creepy and talk about cliché. And I’m pretty sure my husband would suspect something was going on. I’m not quite ready to have the, “honey we need to talk,” talk.

So, I was making the bed as a surprise for Evan. I never usually bother because it’s just going to get all messed up again anyway. But he was so sweet last night; I thought I would at least tidy up a bit before he came home.

Then I did all those annoying things that I guess I will be doing FOR LIKE ETERNITY. I brushed my teeth, fixed my hair, applied anti-aging creams and lotions. Mid slather, I stopped myself. Do I even need these anymore?

I think not! I tossed them all in the trash and then quickly dug them all back out. I should probably check with someone on that first.

I also put my contacts in, cursing the most annoying part of my routine. My eyes went bad in middle school. I’m nearsighted. Or farsighted. I can never keep the two straight. I can’t see far away, whichever that one is. And I guess I never will. So far all this vampire thing has done for me is a little extra strength and instead of just sensing how animals feel, now they’re all yacking away at me all the time!

Just this morning a robin was telling me how much he liked the worms in my backyard, compared to my neighbors. I swear he said that. To me. I don’t know if I’m more surprised by the fact that they are talking to me or by their proficient use of the English language.

Anyway, the reason I was telling you about my morning routine was that today it wasn’t so routine. Just as I was heading to Starbucks to get my grande skinny latte (like I always do), my college tutor showed up (the one from my confession last week). We’d already met on Tuesday and uh, had quite the reunion. But now he was parked in front of my house all skittish and worried. I couldn’t go with him; I had to meet Emme.

So, I promised I’d meet him tomorrow… at the cemetery??

I have a confession. A big one. Like huge. And you’ll probably never think of me the same and I don’t blame you. And maybe I don’t care. But I have to tell someone what I did.

That guy. The one on Nerdo Vamp’s website. I left him for dead. There he was flat on the ground, blood seeping from his nose, and I walked away. Worse, I shouted, “Loser,” and rolled my eyes as I did it.

And then into the frat house I went, ready to shotgun beers and judge freshmen who’d gained the dreaded fifteen.

It was my fifth year in college and he was my philosophy tutor. He had the most adorable freckles on his nose and always ate string cheese. He wasn’t a total dork like Nerdo Vamp, but he wasn’t the kind of guy I should be seen with.

But I liked him. Evan was out of the picture (we were on a break!) and this guy made me feel good. So, we hung out a few times at his house and watched movies and maybe kissed. All right, we definitely kissed.

The frat guys
(Image via Joe Cereghino via Flickr)

So, he decided to show up at the big Kegs and Eggs party, uninvited. Then he dared to compliment Serena in front of Moose. Let’s just say Moose had a brain like my subscription to the New Yorker–not getting much use. Kinda that whole “beer good, nerds bad” mentality.

The frat guys hauled him outside and took turns beating him with a bat. I just stood there, trying to look amused. It was supposed to be funny. Right? A bunch of drunk jerks beating the crap out of my not so cool friend.

On the inside I was freaking out, but what could I do? All my friends were there. I was in the running for big sister of the year. No one could know we were friends, or worse had kissed. I’d be blackballed.

And it was his fault for crashing the party. Why would he go somewhere he didn’t belong?

The next morning he was gone. I looked for him around campus and went to his house a few times, but I never saw him again. Even his furniture had disappeared. It was as if he never existed.

A few months later, Evan and I got back together and that was it. I didn’t really think about him again.

And now, there he was, in a suit, smiling at me from Nerdo Vamp’s website.  He was listed as a consultant, along with two other suit-wearing men.

I dialed again and this time Nerdo Vamp answered. I asked him about the consultants on his website. Turns out my old friend is an identity specialist. He helps vampires transition into new lives once they’ve aged out of their current one. I guess the DMV can’t know that you’re going to be 32 forever. Neither can your neighbors, the IRS and the people at the Starbucks.

“Why, Libby, my dear you won’t need his services for quite some time. You should be fine for at least a decade or two,” Nerdo Vamp said.

“That’s fine. I just want to talk to him now. Get an idea of how the whole thing works.”

“Well, certainly. I will arrange something. How about next Tuesday?”

“Perfect.” I hung up the phone and went straight for my closet, where my next biggest decision awaited me. What was I going to wear?? 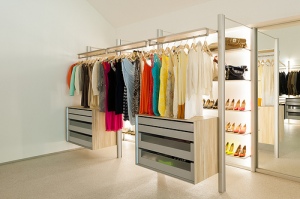 I’d like to say this is what my closet looks like right now, but my maid only comes over once week. Sometimes Evan is so cheap!
(Image courtesy of Koen Dries via Flickr)

Mr. Brown Eyes arranged the whole thing. He said we had to meet–we had common interests. When I first saw the guy I thought: As If!

But he cut right to the chase. He was a vampire too. A big, nerdo vampire.

Who knew something like this even existed? You would think with natural selection or evolution nerd vampires would go extinct. But there he was, sitting across from me, looking at me though those nerd glasses.

Thanks a lot, Mr. Brown Eyes. You somehow figured out my secret and instead of setting me up with the guys from The Vampire Diaries, or even staking me, you set me up with this geek. 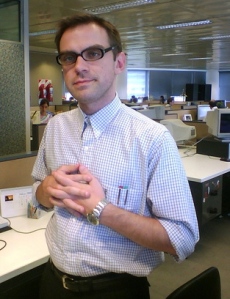 He sort of looked like this guy. I guess. I mean they all sort of look the same. (Image courtesy of Andres Vilas via Flickr)

So, Nerdo Vamp yammered away, while I tried to hide my face from the other breakfast eaters. I have an image to protect you know.

He smoothed his plaid button down shirt with spindly fingers. “Well, Libby, now that we are both privy to each other’s situations. I must tell you the reason for our meeting.”

“You see, I am a financial planner, for vampires. Now before you dismiss me, let me explain further.” He removed a gold embossed business card from his shirt pocket. “Vampires, especially those new to the lifestyle, have difficulties far beyond that of an ordinary human. We must plan for centuries of turbulence, the unknown, a life that stretches far beyond our imagination. A life that will be filled with great angst if not properly prepared for.”

I dropped the card into my purse and took a sip of tea. Could Nerdo be any more of a buzz kill?

“First tell me how you knew I was a vampire,” I said, trying not to stare at the muffin crumb dangling from his lip.

“Well yes, of course. How rude of me to dive right into my pitch without explaining more about us. My partner, the man you sold the home to, I have trained him to detect vampires. The small nuances, the subtle clues that give our kind away.” He reached for a lemon wedge, nearly knocking his water over. “Well, I’ve always been clumsy. Even vampirism couldn’t cure that.” He gave a sheepish smile and squirted lemon juice everywhere, but in his water glass. “I am especially interested in new vampires. And there has been so much activity in North Carolina, the Raleigh area.”

I popped a grape into my mouth, acting only semi-interested. “So, what was it about me that gave it away?”

“Well, Libby, you were dare I say, easy to sniff out.” He patted his lips with the napkin, finally ridding his face of the offending crumb. “Your fangs came out while you were showing the house.” 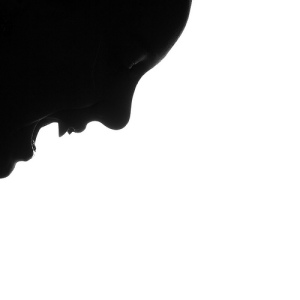 I shook my head.

“Yes, Libby, when you took the tumble in the bedroom. You might not recall since you took quite the hit to the head.”

“Don’t be alarmed. Your skill will improve with time.” He stole a look at his watch. “Well, Libby, I better be off. Please, take a look at my website and I’m on Twitter too.” He paused and let out a loud nerd laugh.

I tried not to wince.

“Who would have thought I’d be on Twitter? An old-fashioned guy like me. I was anti-wheel when it first came out.” He let out another nerd laugh. “You know, because I’m so old. Get it?”

The couple across from us whispered a few select words.

“Yes, indeed.” He scooped up his briefcase and shook my hand. “Well, Libby it has been a pleasure meeting  you and I look forward to future conversations.”

I wiped my palm on the tablecloth and slunk back in my chair. Like I need Nerdo’s help. Evan and I have plenty of money. And I’m smart. I’ll just invest in real estate or gold or something.

My phone buzzed with a new text message. It was Mr. Brown Eyes. Ugh. He was encouraging me to check out the website. These two were worse than that couple that wanted me to save the whales with them or whatever.

Fine. I clicked the link and gave a cursory look at the page, just to say I did it. But then a picture caught my eye. I hadn’t seen him in forever. But it was him. Oh my god it was him.