Imagine you’re walking along a path and you encounter an overpass. On one side of the sidewalk, there is a hillside covered with rocks and on the other side there is a small gravel area and then a creek. Like this:

Sitting in the small gravel area, are two people in camping chairs, facing the rocky slope, eating and reading books. 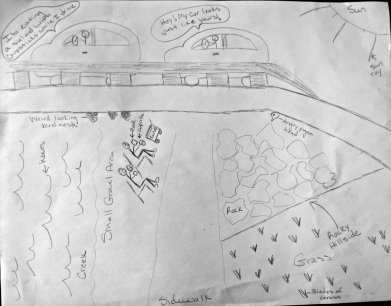 Would you think this was strange? Would you have the nerve to say something to these people? Or would you stare straight ahead, hoping they wouldn’t lure you over with a chocolate cupcake?

What if I told you there was a marmot in those rocks? And these people were trying to trap it, so it could be returned to the mountains where it belonged?

That wouldn’t seem so crazy, would it?

You better be shaking your head no, because that’s exactly what we did about two years ago….

One day, on my regular walk during lunch (because I am very diligent about my exercise routine, as you all know), I noticed something out of the corner of my eye. There was this creature standing on one of the rocks, up on his hind legs, surveying the area.

Now, I’m no expert on the genus Marmota, but this was certainly a yellow-bellied marmot, and he was not supposed to be living this close to the Cherry Creek Mall. If he needed a new winter coat that badly, he could stop at the outlets in Silverthorne – much closer to his desired habitat of 6,500 feet or higher.

I contacted the Division of Wildlife and was essentially told that if I trapped the marmot, they would take him back to the mountains. Um, okay. You’re the Division of Wildlife, and I’m a nurse who works in an office and have had zero training in setting traps, handling a wild animal, and preventing the spread of zoonotic disease, but sure, I’ll give it a go.

Instead of going right to the animal trap store, because that would be silly, I made a few more calls and was finally referred to Jack. Jack was a very busy man. You see it was raccoon season and he had a huge shipment of raccoon feed coming in for all the rescue raccoons residing in his backyard. But, he’d already had calls about this marmot. Yes, my marmot was famous. He’d been tracking the little guy as he made his way down the creek, from one neighborhood to the next.

I convinced my boss to let me go early, because, duh, there was a marmot that needed tending to at the creek, and this took precedence over people with complaints about their healthcare.

That’s when my poor husband got involved. The next day we tried the trap that my dad let me borrow. We set up our chairs and intently watched our baited trip on the rocky hillside. Within minutes a bunny sniffed out the booty. I jumped up and shooed the saboteur away. A few minutes later he returned. And again, I shooed him away. As soon as I was about to panic, the marmot’s head appeared from within the rocks. He scampered over to the trap, triggered it and then ran right out. The trap was too small.

So the next day, we went to the ranch and home supply store and asked for the traps.

“What’re you trying to trap?” asked the man.

He shrugged. “That’s a first.”

I shrugged back and sipped my iced soy latte with cinnamon.

“You’ll want the raccoon sized one,” he said.

We placed the trap and waited. Now it seemed like he’d never show himself again. More and more people started to pass. We got strange looks, curious looks, sideways looks and suspicous looks.

A few people came right up to us and asked what we were doing. I began to keep a tally. Passerby’s fell into three categories: avoids eye contact, gives strange/distrusting looks, or says something. At the end of the day, most people fell into the ‘avoids eye contact’ category.

We spent almost the whole day there and yes, the marmot did show himself. He walked right up to the trap, gave a sniff and then grabbed onto it and shook it. When it didn’t trigger, he walked around to the to the back, stuck his hand through the bars and tried to reach the food. He couldn’t reach it, but he also didn’t go back in the trap. He’d figured out.

We tried again a few more times, but never caught him. Then one day I never saw him again. I tell myself he found a ride back to the mountains, and now he bores all his marmot friends with the story of how he outsmarted two humans and ran off with their apple.