Brian parked his BMW in front of the single story nursing home.

Nerdo Vamp opened his door first, letting the cool, damp air in. “I think it would be best if just Libby and I went in.”

Brian nodded and turned the car off.

“She works at a nursing home?” I whispered, trying not to look too closely at the residents gathered in the dining hall. They were so gray and fragile and worn. Their skin, their hair, their clothes, everything about them looked tired.

“I do believe Ms. Scott has a fondness for the elderly, if I remember correctly.” Nerdo Vamp turned his attention to the bubble-gum chewing, twenty year old manning the front desk. “Come, let’s check in.”

“Name,” the girl said without taking her eyes from her phone.

Nerdo Vamp laced his fingers behind his back. “This is Libby and I’m–”

“No, not your name. Who are you here to see?” The girl set the phone down and smiled sweetly. But the smile was fake. I would know. I’ve used that smile to get more than a few free martinis.

“Ah, yes. We are friends of Camden Scott. We’d like to surprise her, for her birthday.” Nerdo Vamp adjusted his glasses and tried to smile sweetly. Also fake, but not nearly as good as the gum chewer’s.

The girl’s eyes became huge. She tore down the “Tranquility of Nature” calendar that was hanging on the bulletin board to her right. “I didn’t know it was Camden’s birthday. I’m in charge of birthdays. Shit. I mean damn. I mean phooey. Whatever old people say.”

Nerdo Vamp cleared his throat. “Not to worry, Miss. I know Camden is quite private about her birthday. She wouldn’t want a big affair in her honor, just cocktails with a couple of her dear friends.”

“Should I at least get a cake? Cookies? No, not cookies. No sweets. Camden doesn’t eat sweets, except that weird cake she brought in for Easter.” The girl pretended to gag. “It was awful. Oh, what was it? Something with an S.”

“I believe what you are referring to is Simnel cake, a type of fruit cake.”

The girl nodded and puckered her face. “It definitely had fruit. Blech. I’ll be sticking with Peeps and Cadbury Eggs next year.” 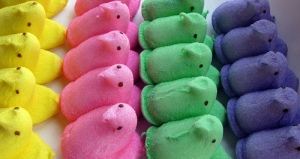 “Well there’s no accounting for taste.” Nerdo Vamp smiled again. “Now if you don’t mind directing us to where we might find Camden.”

“Yeah, sure. Her office is down the hall, that way, on the right. Her name’s on the door.” The girl picked her phone up and turned away.

“Come in,” a cheerful voice responded.

Nerdo Vamp pushed the door open, revealing a woman in a black suit I recognized straight from an Ann Taylor catalog. Her reddish-brown hair was in a loose bun, dark framed glasses highlighted her green eyes. I wondered if the glasses were just to make her look smart. I tried the fake glasses thing once, but ended up getting less free martinis.

The woman rose and held her hand out. “Hi Libby. I’m Camden and I’m so glad you’ve found me.” Her gaze shifted to Nerdo Vamp. She looked him up and down, with her eyebrows raised, before turning back to me. “We have a lot of work to do and not a lot of time. How long has it been since you last spoke to the man who turned you?”

I fidgeted with my ponytail. “Uh, never. I’ve never spoken to him. I just woke up one afternoon, with a killer headache and a crazy note.”

Camden rolled her eyes. “Figures. Colin can be such an ass sometimes.”

“Excuse me, Camden. What exactly is it that you want from Libby?” Nerdo Vamp asked.

She removed her purse from the bottom desk drawer and nodded toward the door. “The question isn’t what I want from Libby. It’s what can I do for Libby.” She closed the door behind us. “I understand you have a little problem with Erasmus.”

I nodded. “Little is one way to put it.”