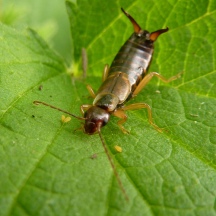 What’s that over there? On my nightstand. There’s something crawling. A creepy, crawling something. I toss my book to the side and leap out of bed. It’s a pincher bug, also known as an earwig. Yuck! For whatever reason these bugs really creep me out. I mean what are those pincher things on its behind for?

I scoop it up, throw it outside, and get back in bed. I try to forget about it, but my gaze keeps shifting from my book to the nightstand. Are there more? Where are they coming from? Why do these bugs keep bugging me?

The week prior, I awoke to the sensation of something crawling down my arm. Ew. I brushed it to the floor and went back to bed. I mean bugs are just a part of life, right? I drifted back to sleep, not thinking twice about my multi-legged visitor.

Two nights later, as the sun was rising, I felt it again–a bug crawling up my arm. My eyes popped open and I caught the offender. It was another pincher bug. I flicked it to the floor before it could crawl under my hoodie or make a dash for my ear canal. Next to me, my husband was un-phased. I swear they were just targeting me.

As bedtime grew near the following night, I wondered what awaited me. Was the earwig still scurrying around my side of the bed? And what did he want? Could I bargain with him? Was he reasonable?

I picked up my book and started to lose myself in the fictional world of wizards and warlocks. Then, out of the corner of my eye, I saw movement. There was something crawling on my nightstand. I expected to see the earwig, but instead found a spider. 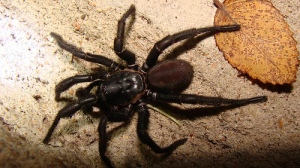 He evaded my attempts at capture and hid under the cord of my lamp. Fine. I’ll keep reading my book.

And that’s what I did, with frequent (we’ll say every thirty seconds) turns of my head to monitor his whereabouts. On my sixth or seventh turn I lost him. I frantically searched the area and was about to give up when I saw him IN MY GLASS OF WATER. He had crawled almost halfway down, to the edge of the water. His front legs were splayed wide so that his face was just touching the surface. The arachnid was drinking my water. I swear. I blinked a few times and tilted my head to get a better view. Now I could see the surface of the water was moving. I assume from his… mouth? Tongue? I don’t know, I just know he was lapping up water.

Of course, I didn’t have my camera ready, so I’ve gone ahead and recreated the scene for you:

A glass of water.

Plus Mr. Spidey.
(Image courtesy of Sean MacEntee via Flickr)

Looked just like this when he was drinking. Okay, okay, you have to use your imagination–it was the best I could do.

When he was finished, he nonchalantly turned around and crawled out of the glass. I tried to catch him, but he eluded me again, crawling behind the nightstand and into the dark, dust bunny filled world that I never see.

The next morning I Googled “spiders drinking water” to confirm that I wasn’t crazy. And yes, they do drink water. Then, I began to contemplate just how many times he had visited. Was he a regular? Did he and the pincher bug meet there often? Should I start charging by the sip or begin taking reservations?

Okay, so that was four nights in a two week timeframe where bugs lurked on my side of the bed.

I concluded it could be interpreted in two ways.

1. Like a dream, where bugs mean something is bugging you. Maybe I was worried about quitting my job and all of those anxieties were bugging me.

2. It had been really dry lately, so the bugs were just looking for a place to quench their thirst.

I decided to focus on number two. I removed the old water glasses that usually lingered on the nightstand and wiped away any condensation. When I got in bed that night I set a small paperback on top of my glass and slept easy. And guess what?? It seems to have worked. No creepy, crawly visitors since!

18 thoughts on “Hey, Spiders Get Thirsty Too!”

Leave a Reply to Deep in Imagination Cancel reply