Glue in your hair, burns on your fingertips, and a coffee buzz so strong your crafting materials sing show tunes right before your eyes. This is what happens when you host a bridal shower … a bridal shower inspired by PINTEREST.

I mentioned in a previous post that my cousin got married. Well, I offered to host the shower (because I have a foolish desire to make tea sandwiches and have strangers peer in my medicine cabinet) and became part of the whirlwind/sinkhole/minefield that is the wedding industry. It was amazing/utterly consuming.

My planning began innocently with an Internet search for bridal shower ideas, which piqued my interest in tissue poms. And that’s when I saw it: my first Pinterest page. It was beautiful. Dotted with images of tulle poms, felt flowers, paper rosettes, pastel and vibrant colored bunting. Things that no mere mortal could have possibly created. I was hooked.

I signed up for my own Pinterest account and soon I had the entire shower mapped out in a collage of images.

Almost all my free time was committed to the shower. I enlisted the help of my reluctant mother who eyed the glue gun nervously and cut cardstock with trepidation.

Soon, strings of fabric were embedded in the couch, rhinestones became tiny, foot piercing land mines, and wayward strands of glue floated in our wine glasses.

I tried to remain organized, but the crafting supplies quickly took over the house.

There were bags upon bags from Joann Fabric and Hobby Lobby to keep track of. Accusations spewed from my mouth when I couldn’t find the scraps of tulle I knew I’d saved.

My husband (staring blankly at the computer): I didn’t touch anything. I swear.

Me (now dumping the contents of bag after bag on the floor): Then, why is it gone? You just throw things away. That’s what you do. You’re trying to sabotage me!

My husband (still staring blankly at the computer): Did you try downstairs? Or in the bedroom?

Me (splayed out in a pile of felt, ribbon, buttons and despair): Yes, of course I checked.

My husband (now pushing a pile of fabric strips to the other side of couch and flicking on the TV): Well, go buy some more.

Me (bolting upright): And admit defeat! I won’t do it. I will find those scraps of tulle if I have dig through the dumpster!

My husband (shrugging): What do you want to watch tonight?

Me (walking into the bedroom to resume my search): Uh, never mind, found it. He he. It was stuffed behind a fake plant.

Then after my last day of work (woo hoo!), I went into full strategizing/crafting mode. I assigned priorities, duties, and command posts.

There were a couple glitches, but overall I think it turned out pretty awesome. Here are some pics:

The chair décor was made with fabric cut into 1 to 1 ½ inch strips and then sewn with a running stitch, leaving two loops on either end–I knew how the chairs would look before I started these, so I had an idea of how I would attach them. Various size tulle poms were taped to the top of the tent using fishing wire and clear duct tape.

We had mismatched plates on the table that my aunt was very kind to donate. For the flower vases, I wrapped old soup cans in thin scrapbook paper and embellished some with ribbon and buttons.Then, I used scraps of the same paper as cards for the guests to write their well wishes, etc. Lastly, the napkin rings were made from yarn poms. These are essentially the same concept as the tulle balls, you just wrap the yarn around a fork instead of a larger item like cutting board or large book. Then I tied a longer piece of yarn around the center of the pom, so that I now had two long strands that I could tie around the napkins after they were rolled.

For the serving tables, I wrapped plain white gift boxes in ribbon and mixed this with cute gift bags stuffed with tissue paper. I also scattered some Scrabble tile words around along with some felt flowers. 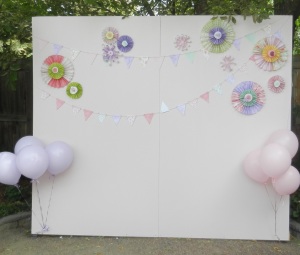 This was our photo booth (and we used it for the backdrop as the bride-to-be opened presents). I made bunting and rosettes using the same pack of scrapbook paper. For props, I made flower headbands and also a cowboy hat with a veil. The cowboy hat was easy. I just found a cheap hat at a party store, got a few yards of tulle, wrapped the tulle around the hat and tied a not in the back. Other props included: flowery dishwashing gloves you can sort of see in the picture below, an apron, broom, some mixing bowls, tea pot, big sunglasses, boas, masks, pinweels, and those big nose/fake mustache glasses.

Here are a couple pics of us enjoying the party: 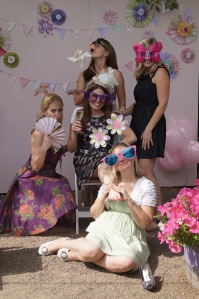 We had a few people hang out after the shower (a shower isn’t a shower without an after-party) and in case you’re wondering, this is what one of my beautiful tables looked like the next day:

Of course, now that the party’s over I’ll have to focus on why I quit my job in the first place–my novel. I’ve been doing some webinars and working on this author platform thingy everyone is talking about. I mean you can’t subsist on Pinterest crafts alone.